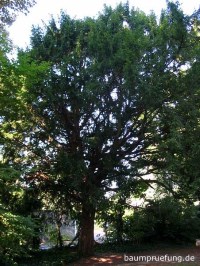 So if a person born of a fir tree is not to be found in its description, he or she should look here at the yew tree.

Christianity removed the yew from the Celtic horoscope. At that time the yew was widespread throughout Europe as a slow growing conifer. For the Celts it was not only considered a "secret tree of death", but also a "tree of patience and eternal life". It was even believed that it would guard the threshold to death as a "guardian of the underworld".

Already the Romans made use of the wood of the dark yew forests, not only to make their weapons from the wood, but also to deprive the Celtic druids of their important place of retreat. The Celts, on the other hand, probably also used the yew forests to produce their secret remedies and poisonous substances, and thus also poisonous arrows, from the juices of the yews. Even the Germanic tribes regarded the yews as sacred trees that could protect them from witchcraft, sorcery or even demons. For this reason, burials were also carried out under yews at that time and the dead were buried together with yew branches.

Those born under the sign of the yew tree are generally regarded as late bloomers and individualists. They care little about what others think of them or say about them. Always keeping in mind that life is very short, they enjoy it much more intensively than most people.

"Heavily cheering, saddened to death": While searching for the meaning of life, the yew meets strong mood swings. The yew-born tries to hide his weakness and sensitivity behind a facade of sarcasm and aggression.

One rather counts yews to the tough and persevering people. Their stamina is extraordinarily high, so they are often considered a role model, especially in areas of patience and virtue. They have a preference for the company of people who radiate a cheerful and humorous manner. Those people manage to get the yews out of their darkest thoughts and bring the beautiful sides of life closer again.

Yew-born are often very wise people. Just like the firs, however, they are not very sure for a long time in their lives where they belong. Fortunately they can always identify themselves with what they are doing. In the community they are appreciated for their innovative ideas and their extraordinary way of thinking.

For Yew-born it only gets a little hairy when they are dealing with authoritarian people and it gets especially bad when they also want to know everything better. Yews search for the truth and enjoy living out their artistic abilities. The dream job offers them exactly this freedom and demands their abstract way of thinking.

Often yews are introverted, which is why they prefer an opposite part in the partnership. It can take quite some time until the love eats ripe, but then it will be especially faithful and last a lifetime. The partner must give his yew a helping hand in life.

In particular on stomach, intestines, sinuses, chest, nerves and soul a yew born should pay attention, since these can be its "Achilles' tendon".