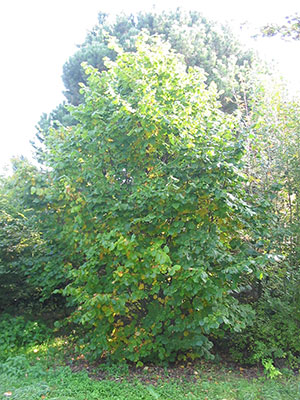 The hazel bush with the Celtic name "Colli" was considered by the Celts to be the "holy wish tree of the extraordinary". Thus it is mentioned in the tree alphabet under the letter C.

The Celts saw the hazel bush as the "gate to the other world", which hides many mystical beings such as spirits, fairies and ancestors. Although the unknown powers were approached rather cautiously, they tried to tame these powers and abuse them for themselves and their own desires. Be it for fertility rituals or weather spells. The hazel branches were said to have purifying effects, which is why they were often "charged" with all evil and everything undesirable was purified by burning them afterwards.

Thanks to its exceptional charm and frugality, the hazel bush always achieves its set goals. But even if their life is very unusual, it is not an easy life.

A hazel bush-born knows exactly when he wants to be the center of attention, even if he is rather reserved and does not like to make an impression. His outwardly radiating calm effect is highly appreciated by his fellow men. With a lot of understanding she quickly manages to win people over if she wants to.

The hazelnut is full of solidarity and compassion, and is committed to the common good and that of her family with full fighting spirit. For this she reaps the fame she often desires. Hardly any other tree mark can match its helpfulness and sense of responsibility. However, the hazelnut can quickly become overburdened by this if it gets too involved.

Despite the everlasting moods, she is an honest and tolerant partner

You can always rely on the judgement of the intelligent hazel born. Their leadership skills and intuition make them excellent teachers or educators, but at least people seem to notice. However, the Hazelnut does not have to act as an authoritarian person to guide her fellow human beings accordingly, as she can do this by skilful manipulation. The people around her do not notice anything of this. Nevertheless, the hazelnut is often too impatient and strict with myself, because she would like to be in the first place.

Since the hazel bush has difficulty coping with stress, it quickly hits him on the stomach. It should therefore pay particular attention to its digestive organs, such as the stomach, intestines, liver and bile.