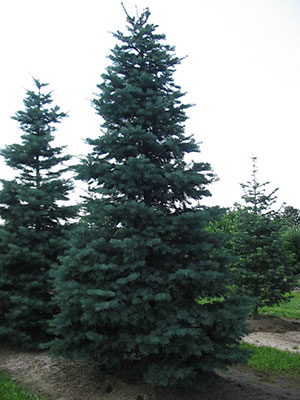 Among the Celts, the fir tree was known as "Ailim" and stood for the letter A. The Celts believed that a fir forest had a magical effect. They considered it as a tree of dignity and carrier of light.

No wonder, then, that the fir tree is still very popular today, even if more as a Christmas tree.

The fir is considered to be quite cool and tart. Its taste is very unusual, but the firs always keep a clear head. Fir-borns are considered harmonious and benevolent beings, but they are equally vulnerable, ambitious and gifted. They always want to make everything better and make a special effort to do so, according to the motto "Diligence has its price". No new beginning is too exhausting for them, they draw strength from their basic trust in life.

If the fir is not afflicted with a chronic disease, it enjoys a very long life. Its moods and attachments often make life with it not very easy, which is why it can remain lonely despite great company.

Fir-borns always attract attention through their cultivated appearance. They are valued for their dignity and their restraint. Especially the female firs have an eye for beautiful jewelry, beautiful furniture and generally the beautiful in any form.

Unfortunately, the fir tends unconsciously to act selfishly, which does not necessarily mean that she treats the people around her from above. On the contrary, because for fir trees no sacrifice is too great for the closest friends and acquaintances. She likes to be the protector and is therefore highly appreciated as a friend. However, the fir never lets her independence be taken away from her and therefore she immediately clears up small misunderstandings.

The fir is rather a quiet creature and does not talk very much. It does not have high standards and lives rather modestly, which makes it appear outwardly to strangers as repellent and vulnerable. This behavior is a natural instinct of the fir trees, which also hold back in nature before they present themselves in all their splendor and one can recognize their true character, which radiates full of warmth and kindness.

Sadly, the fir often has enemies, but it also has particularly loyal friends, because you can always rely on it in the greatest need and it is a helpful person.

Fir-born babies are very demanding in love, but do not give back quite as much, so they are often dissatisfied. But if they do fall in love with the right person, this love is very passionate and faithful. The relationship with the fir tree is not always easy, which is why it needs a patient and understanding partner. However, the fir is still considered a family man and would sacrifice himself for her at any time, regardless of losses.

Thanks to its distinctive intelligence, the fir opens up many different professions and career opportunities. It is not uncommon for the fir tree to later pursue a profession other than the one it has previously learned. Especially in artistic fields, fir trees are often considered talented. They always need a goal in their life that they can work towards, otherwise their abilities would dwindle.