What does the Celtic Cross mean?

Many symbols from the time of the Celts still characterize our world today. Thus, everyone should be familiar with the Celtic cross, also called "Celtic cross", especially from graves in cemeteries. At that time, however, this was less in use as a tomb, but simply a high and free-standing pillar. But what exactly is this "pillar" all about? You will find out in this article. 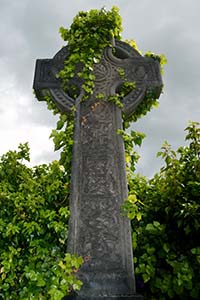 The Celtic cross is a so-called beam cross with an extended supporting beam. Around the point where both beams cross there is a circle. Even more characteristic of such a Celtic or Irish cross, however, are the decorations in the form of knot patterns and other symbols in the beams and in the circle.

The origin of the Celtic cross

The Celtic cross known today finds its origin in the Celtic "high cross" and probably dates back to the 8th or 9th century. Usually up to 6.7m high and made of granite or sandstone, the cross is a Christian symbol, even though it is strongly rooted in pagan beliefs. The stone cross ended only with the end of the 12th century.

Due to the revival of Celtic beliefs in the mid-19th century, Celtic crosses were also rediscovered and found use again.

Meaning and use of the Celtic cross

The four ends of the cross could have been symbolic of the four cardinal points of north, west, east and south or the elements of fire, water, earth and air.

According to a legend, the famous missionary St. Patrick connected the Christian cross with the pagan sun to teach the Celts and other new converted followers of the religion the meaning of the cross and the life-giving sun. The cross is also believed to have symbolized the superiority of Christ over the sun, since the cross and thus Christ were above the circle, the sun.

A placed Celtic cross was supposed to mark a special or sacred place and set it apart from the rest of the land. So there could also be, similar to the Trees of Life, gatherings or tribal meetings could take place there. Likewise, this place could serve for contemplation or inspiration and was supposed to offer protection to travelers.

By the way, there are still more than 100 Celtic crosses in Ireland today. Very famous ones are in Ahenny, Ardboe, Drumcliff and Monasterboice.

Is the Celtic Cross forbidden in Germany? Is it even true?

Unfortunately, the Celtic cross, like many other symbols, has been used by right-wing groups as a substitute symbol for symbols that have already been banned. As a result, this has unfortunately also been banned many years ago in "stylized" form and its use is indeed punishable in Germany. Although the Celtic cross in stylized form is indeed probably also prohibited on its own and not only in a clearly right-wing context, this does not apply to the generally known beautifully decorated cross with the extended support beam. Instead, only the cross in the form it was used for a right-wing party is affected by this prohibtion. Here, a completely undecorated variant was used, which also only consists of two bars of equal length surrounded by a circle. Thus, this forbidden cross looks more like a crosshair. The use of this variant should be avoided in any case in Germany, because even people who had tattooed such a symbol without a right background got legal problems. At least when they showed the tattoo publicly and thus landed in a newspaper article.

Attention: This is not a legally binding information but only our research results. Depending on the current legal situation, this could also change again and, for example, be further tightened. If you have any further questions, we can only recommend that you seek legal advice.

For this reason, you can fortunately still find the Celtic cross as a gravestone, statue for your own garden, pendant on chains or even as a T-shirt print.