Tree protection in the Middle Ages 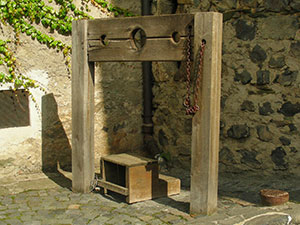 If one were to transfer the customs and traditions of our ancestors for the protection of trees to today's procedures, then the ordinances of that time were the first legally valid tree protection statutes.

The origin of these regulations had economic reasons, as it was primarily a matter of protecting fruit trees and pastures from theft or destruction. The punishments threatened and carried out corresponded to the normal way of dealing with each other at that time.

In the 13th century, the chopping off of a hand was already regarded in the city of Augsburg as an appropriate punishment for felling a healthy and pregnant fruit tree. This continued until the 18th century, when the then prince bishopric of Speyer also imposed this punishment for vine or fruit tree damage. A citizen of Coburg got it even worse, because in October 1557 both eyes were cut out for cutting down vines and trees,

In 1740 the following lines were written in Johann-Heinrich Zedler's encyclopedia: "the fruit trees are so highly respected in the community that, if someone lets himself be lusted, such a thing is wilfully cut down to the detriment of another, such is therefore given a jail sentence after opportunity, or another considerable punishment (e.g. hand off).

In 1766 the diocese of Speyer set new standards and alleviated the punishments for tree offenses. In doing so one thought quite practically, since every chopped off hand meant a mutilation, which became "completely useless and superfluous" for the respective one. Thus one was content with the pillory, the whipping with rods and if it was quite bad, with the expulsion from the country.

In 1781 the Bavarian Landen followed these customs and ordered the beating with subsequent delivery to the workhouse.

From 1808 onwards, the Margraviate of Baden was even able to atone for the deeds for the first time with cash payments, after 10 years of imprisonment had been considered appropriate. The calculation formula for damages was: "Anyone who steals or removes such a tree pays 24 times the price as punishment. The one who was able to pay this price is well off. But there were also clear courses for collision damage: "Whoever approaches a tree carelessly pays half of the above price".

Nobody knows how often tree crimes were committed and actually punished. What is certain is that in the over 2000 preserved files of criminal trials from the 16th to 18th centuries only very few cases occur. These files are kept in the Stuttgart Main State Archives.

The first "plant passport" was introduced as early as 1807, after more than 100 young fruit trees disappeared in the Heidelberg area in several night and fog actions. The suspicion that the young trees had been created on the other side of the Rhine prompted the Heidelberg office to issue a directive according to which no passenger could be transported on a ferry with fruit trees, "who could not, in the worst case, legitimise himself by an official certificate".

Alarmed by repeated thefts, this instruction was extended to all public markets in the surrounding area, where no fruit trees were allowed to be sold that were not accompanied by a certificate from the head of the school and the office, whereby the police had to strictly control this.