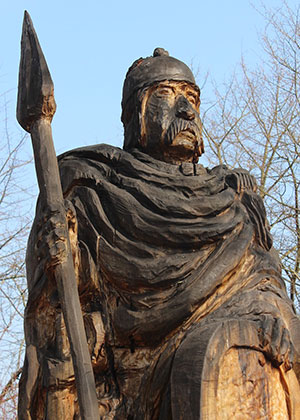 The Celts feared nothing more than that "the sky would collapse over them". But there are interesting things to know about them

Since according to their faith the sky rested on the trees and their gods lived in the trees, it was obvious to them that the trees were something special, even holy. In their way of life and view, which was strongly oriented to spiritual phenomena and myths, the trees always represented a centre and support.

Fire and smoke was something very special for the Celts. The smoke of the fire symbolized the released spirit of the trees. Whether in the huts or on festive occasions, always swelling campfires. The wood of the oak, the most sacred tree of the Celts, was burned most of all.

Also the "Druids", known to us from the Celtic time, owe their name to the oak, which is sometimes denied in different sources. Derived from the Celtic word "dru" for "oak", they were the guardians of the religions, advisors to the tribal princes, healers and much more. The probably most famous druid was Merlin, whose work was handed down in the Arthurian legend.

Apart from the druids, the "bards" were also scholars and very important, as they passed on the knowledge and legends of the Celts through their singing.

Nothing was written down by the Celts. Instead, in the course of time an Ogam or Ogham script consisting of signs developed, named after Ogimos, the Altiric god of oratory. Stones provided with this script were found - predominantly in Ireland - on which however no texts in the actual sense, but in most cases exclusively names of persons, were immortalized. The signs used were in all probability derived from the tally sticks known in the British Isles since the Palaeolithic.

The individual signs are named after trees that begin with the corresponding sound, but that was it. The Celtic Tree Horoscope in its present form, which only emerged from nowhere in the early eighties, is simply a well-made invention from modern times.

Who were the Celts?

There never was a Celtic empire or even a Celtic state, but it was a culture. Whoever joined this culture was also a Celtic. The different tribes had almost the same language and many cultural similarities, but were often at odds with each other.

The Romans called them "celtae" and "galli". The "Celtic homeland" lay somewhere in western France and southwestern Germany, from where they expanded from the 5th century BC onwards.

The name "keltoi = sublime, brave" was given to them by the Greeks. Already from the 6th century before Christ, the Celts settled the North of Europe, the West as far as Spain and the East as far as Anatolia.

The Celts were not barbarians, even though they were often very combative. In the approximately 1000 years of the Celtic period, raids were rather a rarity, most of the time being determined by everyday life in the settlements and farmsteads. There were farmers, traders and very good craftsmen, which proves the numerous finds of jewellery, clay pots, weapons and much more.

The position of Celtic women was very high, unlike that of the Romans or Greeks. They attached great importance to their appearance, as did the men.

The end of the Celts

The society strongly influenced by the existence of the druids and their knowledge distinguished the Celts essentially from all other ethnic groups. They were a thorn in the side of the Teutons and other barbarians as well as the Romans and the Christians.

Whoever wanted to defeat the Celts had to defeat the druids. And so it came one day. Romans and Christians demonized druidism as pagan superstition. The druids were branded as warlocks.

Numerous legacies still today refer to the former existence of the Celts.